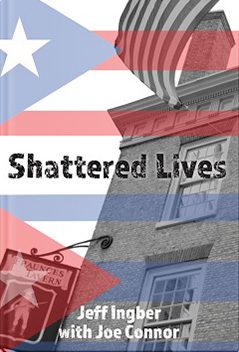 On January 24, 1975, six young businessmen were enjoying lunch in lower Manhattan’s historic Fraunces Tavern when a bomb placed inside the restaurant exploded, tearing throughout the building. It had been planted by a group claiming support for Puerto Rican independence known as the ” FALN,” the most active domestic terrorist organization in American history. Among those businessmen were two sons of immigrants and only children – Frank Connor, with a wife and two young boys, and Alex Berger, whose wife was six months pregnant. Both were murdered, along with two other men, while dozens were injured, many horrifically.

“Shattered Lives”, co-authored by Jeff Ingber and Joe Connor, Frank Connor’s son, chronicles the origins of the Puerto Rican independence movement, its transformation into a Cuban-led Marxist cause, the FALN’s decade-long reign of murder and destruction that was a precursor to future domestic terrorism, the hunt for the perpetrators by a group of dedicated FBI agents, the inexplicable escape from prison by the FALN’s chief bombmaker who eventually received asylum in Cuba, and the political maneuvering that led to Presidents Clinton and Obama granting clemency to FALN members.

Through extensive, exclusive interviews with survivors and family, “Shattered Lives” describes the devastating impact of the Fraunces Tavern bombing on the Connor and Berger families and its many other victims, including NYPD officers, uniting them in their struggle to move forward while seeking justice for their loved ones.